The David Rittenhouse award will be part of a month-long celebration of Black History and Clarence E. Holbert being the second Black American U.S. engraver, the engraver of Eritrea’s currency, the Nakfa. This 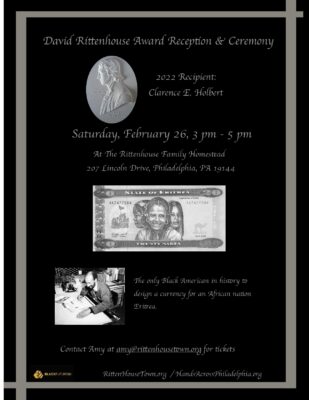 celebration parallels Nakfa’s own 25th anniversary. The award will be presented to family members of Mr. Holbert on February 26, 2022, for his decade of service and outstanding work as the second Black American chief engraver/sculptor of the United States Bureau of Engraving and Printing designer of the Eritrean Nakfa.

The David Rittenhouse Award honors those who demonstrate excellence as it represents one of the many contributions that Rittenhouse made to American History. Rittenhouse was an accomplished man. In his lifetime, he was an astronomer, inventor, mathematician, surveyor and First President of the US Mint. This award honors those who’ve contributed their talents at the highest level to our nation. Historic RittenhouseTown is proud to recognize the work of Clarence E. Holbert.